Some of you may have heard my story of how I won an iPad last summer while attending the Read Write Web Real-Time Web Summit. But many of you have not. It came up at dinner last night, and I thought it was finally deserving of a blog post of its own.

Man, that was quite a week. First, I won tickets to the one-day conference, hosted in New York City. (The conference was outstanding; you can read a recap on my professional blog.) While there, they announced they would be giving away six iPads over the course of the day. At lunch, they gave away four by random drawing. The last two, they said, would be given out at the closing session to whomever created the best rap or poem. Yes, rap or poem.

So, for the rest of the afternoon, I scribbled verses on a scrap of paper, muttering rhymes and rhythms under my breath. By the time the closing session began, I was as ready as I would ever be. Luckily, I was sitting next to my higher ed partner in crime, J.D. Ross, whom I was happy to have around for reassurance.

And I WON! Can you believe it? (The other winner, though, probably deserved them both, as I think he is an Actual Rapper.)

Since the audio wasn’t so good on the video, here is a transcription of the lyrics:

I came down from Boston to learn about real-time

Didn’t know that I’d have to bust a rhyme

I know I won’t be going home feeling mad

Speed-geeked with geeks from ’round the nation

I know what McManus meant

When he said the Real-Time Summit

was a great event

Had a lot of fun thanks to Read Write Web

I like meeting experts in the world of social media

Real-time web, you know we make it rain!

I’ll catch up with you all a little bit later

On New Year’s Eve, I decided to take advantage of the unseasonably warm weather and go on a walking adventure around Charlestown. No, I was not inspired by “The Town” (though I did see and enjoy that movie). I was actually inspired by the loading docks I’ve often spied from the eastward vantage point of the 93 bus. I wanted to see the periphery of Charlestown beyond the tidy brownstones and monuments.

I took the bus to the top of the hill and walked (or nearly slid, given the poorly treated sidewalks) down toward what I now know is called the Medford Street Terminal, where I found the abandoned Revere Sugar Refinery. (I am fairly certain, thanks to this court finding, that it is the same Revere Sugar owned by Antonio Floriendo, who had connections to former Filipino president Ferdinand Marcos. Here are some photos of the recently demolished Brooklyn factory.) Charlestown used to be a hotbed of sugar refining, it seems. Here’s how Revere Sugar looked back in the day (thanks to the BPL on Flickr): 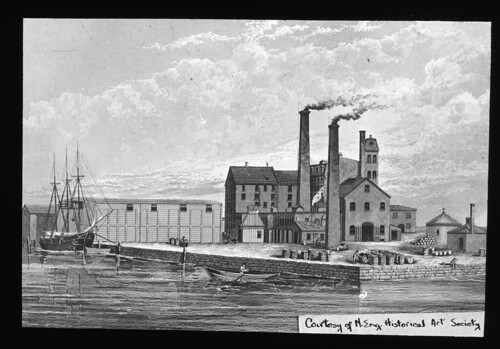 It turns out that I visited the site on the 24th anniversary of its purchase by Massport. The signage on the fenced off area read: “Revere Sugar Site Demolition / Project Start Date: Jan. 19, 1995 / Projected Completion Date: July 22, 1996.” Uh-huh. Adjacent to the Revere Sugar site was an abandoned rail way that local residents have appropriated as a rail trail of sorts. Lots of people were out walking their dogs. Nearby, I also saw some interesting graffiti scrawlings, like “C-Town” and “Townie 4 Lyfe,” as well as a flag for the Northern Ireland Ulster Volunteer Force painted on a back fence next to the Irish flag.

I made my way back toward the tidy brownstones, procuring the most amazing breakfast sandwich ever at Zume’s Coffee House (homemade English muffins, mmm) before heading over to Paul Revere Park, a new park (opened in 2007 as a byproduct of the Big Dig) which offers great views of the Charles River and a stunning from-below perspective of the Zakim Bridge.

Check out all of the photos from my Charlestown excursion: